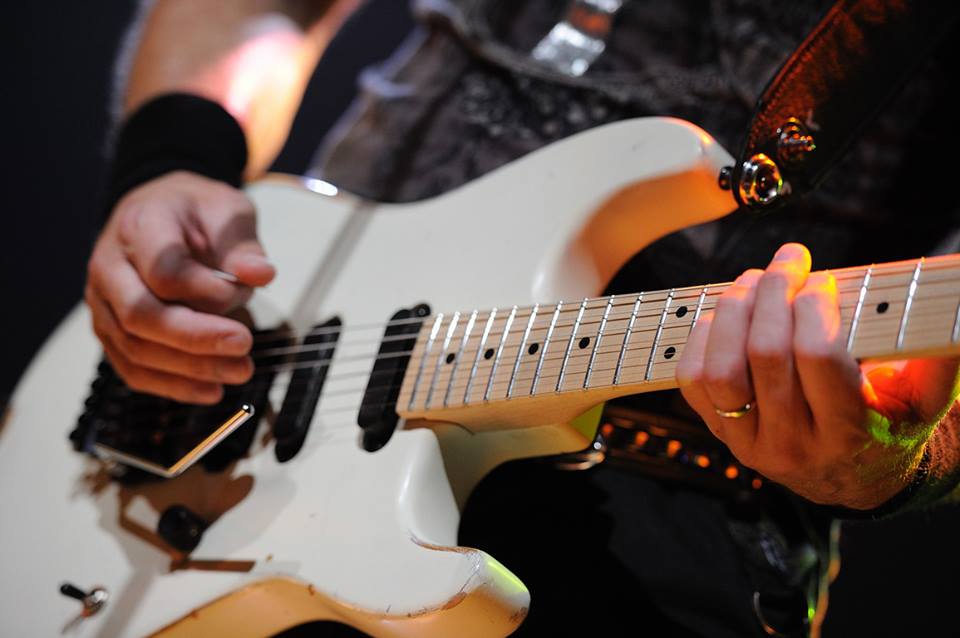 I’d like to explore an approach to picking and fretting the guitar that I’ve been working on for a while. It all began about three years ago, when I started to notice that I was picking a lot harder than I needed, especially when playing single lines. The result I was hearing was kind of a snappy sound, and the more I tried to control it by resisting the tendency to play with a lot of force, the more I started to lose control. It was as though I was trying to pick the string while simultaneously pulling away just enough so as not to overplay. It was a classic tug-of-war with myself.

Like David Gorman—one of my favorite writers and teachers—says, “Never pick a fight with yourself, because someone’s gonna lose and it’s gonna be you.” So I decided to start from scratch and study how the pick actually produces a sound. I began by setting the pick on an open string—let’s use the open 3rd string for our example— to see if I could sense any excessive tension as I anticipated picking the string. To my surprise and delight, I absolutely did. It was as though just by making contact with the string, I felt the pressure to make the string sound and where that anxiety manifested most was in holding my breath and locking the right shoulder.

From my studies of the Alexander Technique, I was aware of the difference between stimulus and reaction. The stimulus in this case was the registered desire to pluck the string, and the reaction was tightening my muscles to make that happen. So after taking note of how I was organizing the act of plucking, I decided to see what would happen if I set the pick on the string, noticed the tensing, and then imagined how I would behave differently if the pick had to stay there for 20 minutes.

Once I considered this, I quickly noticed the tension started to subside. It was as though I had given up my expectation and was able to rest. In the absence of the anxiety, I started to realize I’d been under the impression I had to make a big effort to pluck the string. Since I started playing when I was a boy and the guitar was much bigger, I probably had to work harder to produce a sound. But at this point, I have changed in stature from those days and my relationship to the guitar needed to change as well.

Essentially, I was meeting the string with equal force and finding a point of balance rather than overriding the string. So I’d practice resting the pick on the string, allowing the excessive tension to subside. I’d then take my hand off and let it rest, and repeat the process—all as a means of breaking my habitual trajectory from stimulus to reaction.

The next step involved sounding the string. Once I felt I had sufficiently eased my commitment to my habits, I wanted to find a new way to pluck the string without reverting to my old, overpowering ways. At this point, I had a vivid image of an Olympic diver bouncing on a diving board in preparation for a dive. It reminded me of the pick on the string. If I could “bounce” on the string—effectively sensing the equal force between the string and my hand—all I’d need to do to make the string sound would be to give up my resistance. Like the diver on the diving board, I could let the springiness of the string do more of the work. Rather than being propelled away from the string, I would cease meeting the string with equal force, and instead, give up. Let the string win. By imagining the string almost cutting up through the pick (on a downstroke), it felt as though the string played itself and I was there to create just enough friction to get things started.

After doing this a few times, I noticed that for the first time, I didn’t feel tension in picking the string. The sound wasn’t very loud at first, but it sounded fuller and like a more complete gesture. After practicing downstrokes for a while, I tried upstrokes and was pleased to find the same mechanism applied. As I would place the pick on the bottom side of the string in preparation for an upstroke, I felt my habitual tensing and urge to “lift” up. However, from this new perspective I was able to meet the resistance of the string and imagine the string falling through the pick. Like the downstroke, the sound seemed to release out of the instrument rather than being forced.

This experience soon became the foundation for how I approach picking. Starting with open strings, I eventually transitioned to playing scales and arpeggios, using both alternate picking, as well as sweeping. There are times when I’ll choose to override the string with a big downstroke or upstroke. However, I regularly come back to this practice as a means of resetting my concept of how much pressure I think I need to put into picking. Inevitably, it is a lot less than I think.

The next step to explore was the lefthand technique. For me, the role of the right hand had shifted from one of being highly controlled to meeting the guitar and letting the sound come out as a consequence of more efficient movement. So with the left hand, I was interested in examining what I had perceived its role to be. What I discovered had to do with a struggle between viewing the left hand as a tool for holding the guitar in place and also being able to move freely across the fretboard. I was essentially trying to stabilize the guitar with my left hand while trying to remain free and agile. As I told my friend, it was like having a butterfly on a leash. And again, I saw that this related to learning guitar as a boy and doing everything in my power not to drop it while still playing what I wanted. Realizing this, I started to notice that I was trying to equalize both desires by squeezing the neck and then trying to move my hand around the neck—a conflict of directions.

I went back to the beginning: How do you press down on a string? Is it my job to overpower like my old right-hand approach or was there more information I could learn from the guitar if I ceased squeezing? I was delighted to find that what I had discovered in the right hand applied wonderfully to the left hand as well. I began by placing my first finger on the 3rd string, 5th fret (sounding a C). I’d depress the string slightly and allow the string’s resistance to push my finger off. It was as though I was pushing the string and letting myself be pushed. I would practice pushing down too hard and then letting the string/diving-board effect push me off.

The more I did this, the more I started to respect the tension of the guitar and become aware that no matter how much I could override a string while fretting, the string inevitably found equilibrium as an open string. I began to practice meeting the string, letting my eagerness to fret it calm down slightly, at which point I would let my left hand fall into the string, depress it momentarily, and then give up, and let the string push my finger off.

In essence, I was becoming aware that how you come off of a string is as important as is landing on it. In both the right and left hands, it seemed to really be about doing less and refining my gestures to be as appropriate to the design of the guitar as possible, rather than trying to impose “my technique” on the instrument.

The last piece of this exploratory period was researching how the hand gets from one position to another with minimal effort. For years, I had played as though the fingers were entirely responsible for getting me up and down the neck, and the rest of my body just followed. However, after more research, I started to realize that the hand gets where it needs to go when the arm moves. And the arm moves when your breathing is free. And your breathing is freer when you are listening to the music being created. So it’s all connected.

If I was playing a phrase in the first three frets and then wanted to jump to the 12th fret, I started to realize that I didn’t have to reach up to the 12th fret, but rather if I moved my forearm in that direction, my fingers would follow suit and conveniently be positioned exactly where I needed them. So in addition to understanding the mechanics of picking and fretting from this new perspective, I could see that both hands could be moved easily if I didn’t try to move at the source of playing. With scales, I would practice moving my arm along the trajectory needed to play a scale from the 1st fret to the 12th fret without actually fretting the notes, just allowing the fingers to glide across the strings. Once this movement started to feel comfortable at a slow tempo, I would gradually start “tucking” in the notes, by letting my fingers fall momentarily into place on the desired pitch. This was a huge discovery for me.

Eventually, I was able to move way more freely and without as much tension. Much like my discoveries about the left and right hands, I was now able to see arm movement not as an advanced skill set, but rather a mechanical process. Once I’d clarified the process of what it takes to move my hand, I could then apply the mechanics to the guitar.

Most importantly, the thing that will help you to achieve the best technique possible is to regularly make time to assess how you do what you do, and to let the sound be your guiding light. And whether my discoveries help you or you find alternative strategies, I believe the most effective approach to guitar technique is to be respectful of the guitar’s design while also being aware and appreciative of your own design. These twin perspectives will help you create music that most honestly represents you.