A unique opportunity to join New Zealand's only professional Marching Percussion Drumline.
NZ Drumline (formerly the Auckland Regional Drumline) is an American-style marching percussion drumline looking for drummers of all abilities to join us for the 2020/21 Summer Season.
Formed in 2006, NZ Drumline have worked as the official drumline for the New Zealand Breakers basketball team for thirteen years, as well as supporting many events all over Auckland including 3 seasons at the Auckland Blues home games, Pleasuredome the Musical, 2017 Emirates Team NZ America’s Cup Victory Parade, 2011 Rugby World Cup Victory Parade, the 2015 FIFA U20 World Cup, 2010 FIBA U20 World Cup, 2018 NZ Fashion Week and many others!
A short video audition is required (To give us an indication of ability). Previous rudimental drumming is advantageous but not required.
If you'd like more information, please email Jacqui at info@drumline.org.nz and also like and follow us on Facebook and Instagram - @nzdrumline. Our group is based in Auckland 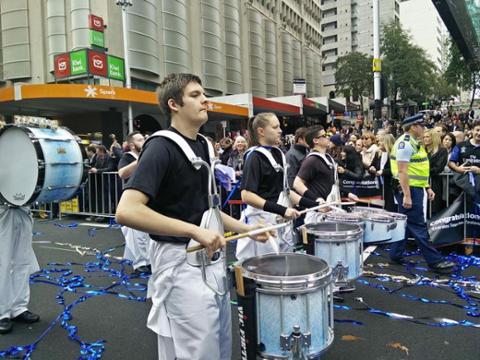